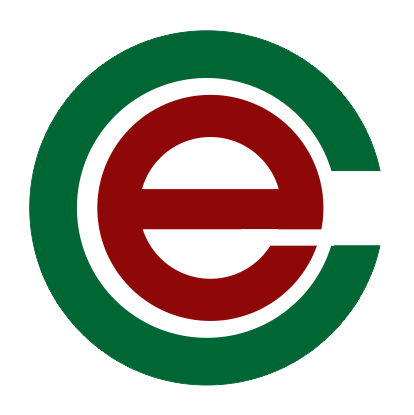 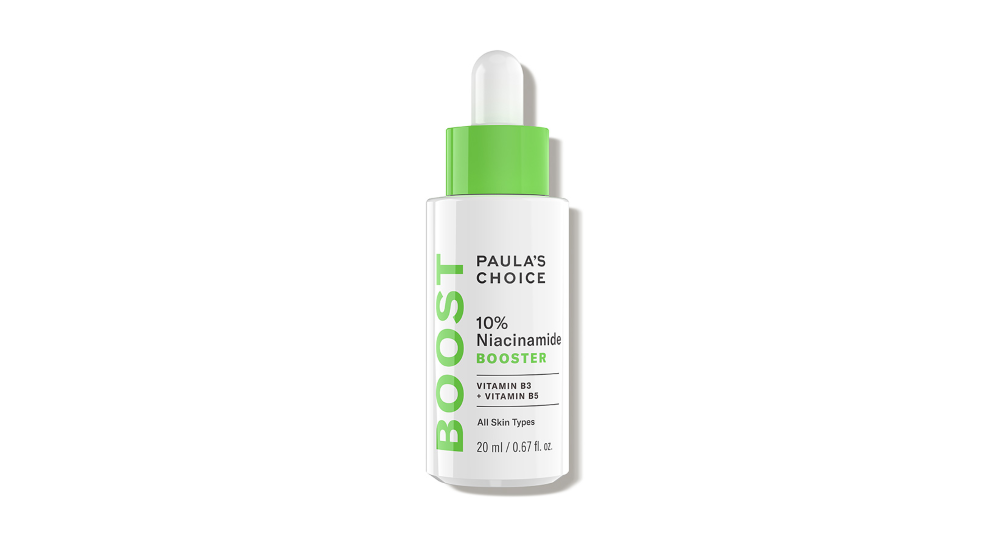 The 10% Niacinamide Booster is a concentrated niacinamide serum booster presented as an ultra light liquid formula that improves uneven skin tone and refines the appearance of pores, texture and fine lines. It also promotes a brighter, younger looking complexion. 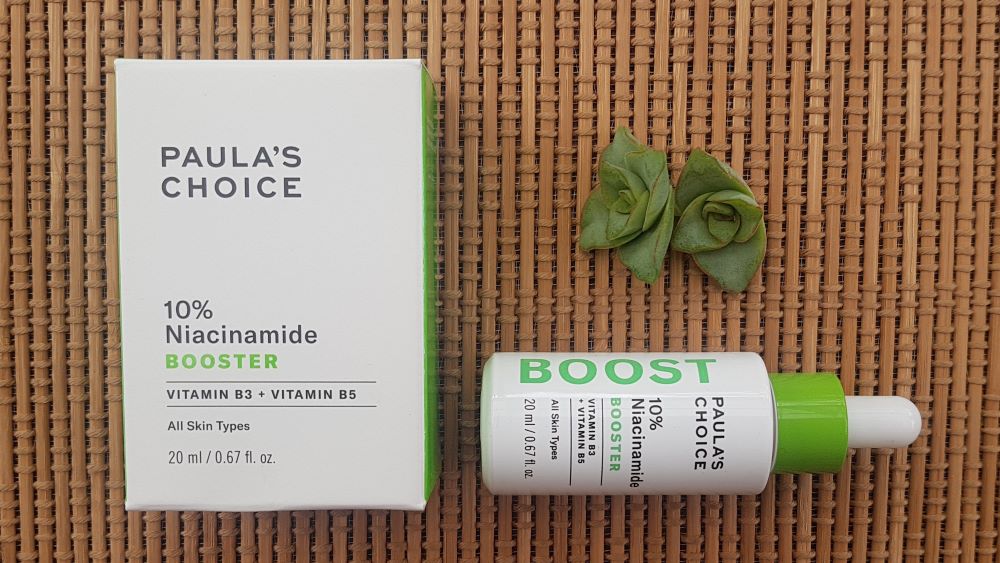 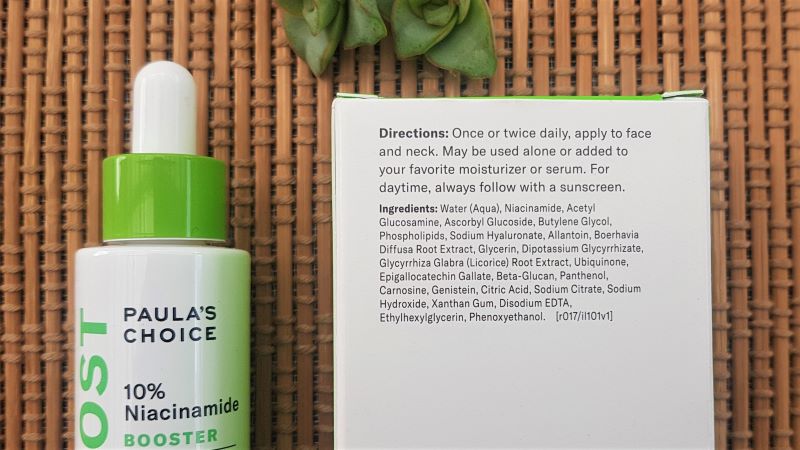 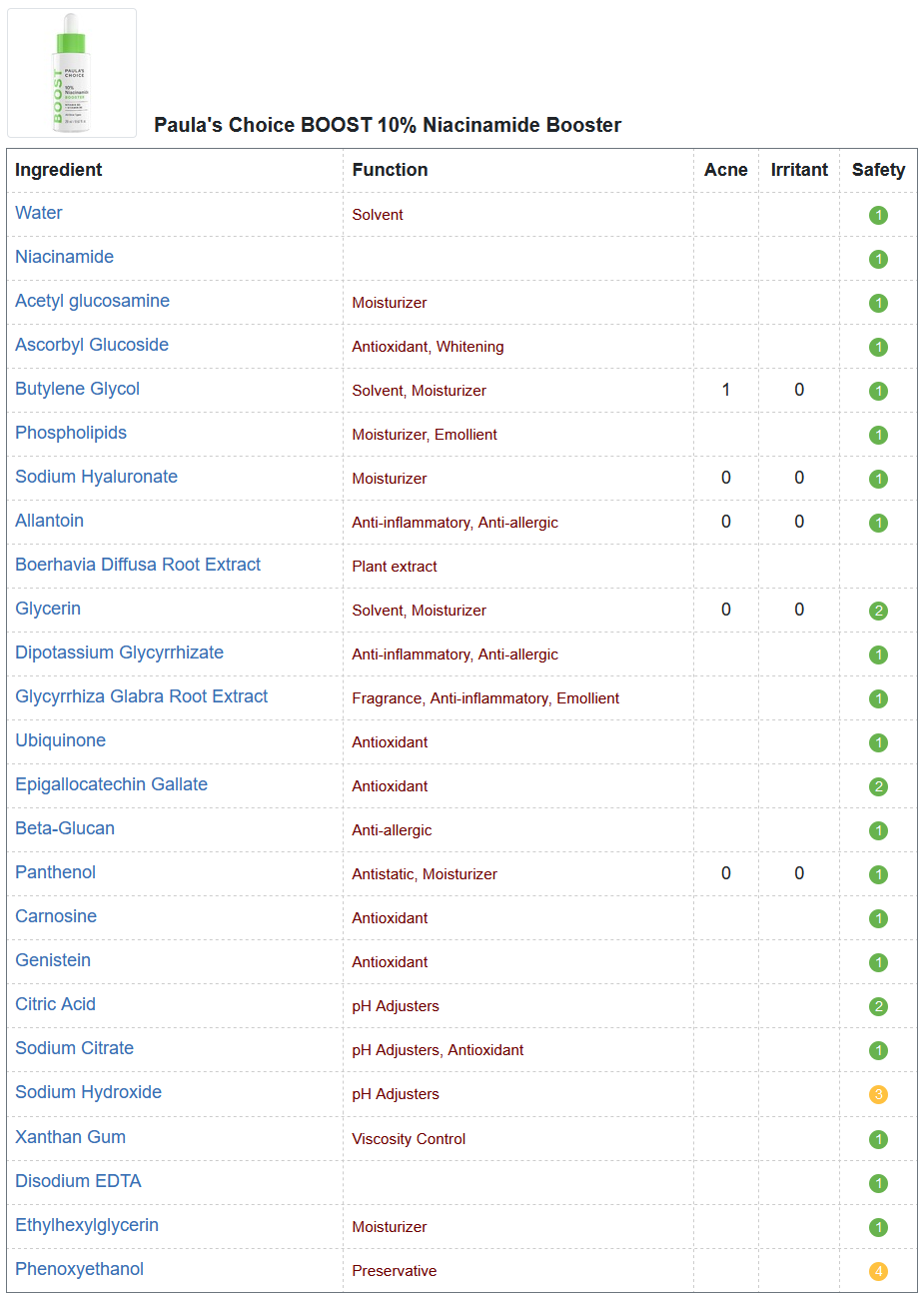 The hero ingredient is delivered at a concentration of 10% and second only to water in the formula. Niacinamide is a well tolerated form of Vitamin B3. It acts as a restorative agent to offer multiple skin benefits. It can brighten skin by inhibiting melanin production. It’s also an effective treatment against hyperpigmentation at concentrations of at least 2% and provides a strong defense against the appearance of discolouration and age spots. Niacinamide is additionally able to improve the appearance of enlarged pores, uneven skin tone, fine lines, dullness and to strengthen the skin surface.

Brightening and anti-aging are well supported by Ascorbyl Glucoside, a stable form of Vitamin C and Acetyl Glucosamine. Other antioxidants that protect the skin against free radical damage include Ubiquinone (also known as CoQ10) and Genistein which also help to build elastin and collagen for wrinkle care; plus EGCG and Carnosine which additionally impart soothing properties. There’s also Licorice Root Extract, Allantoin and Boerhavia Diffusa Extract included to deliver a calming and soothing effect.

And of course, proven hydrators ensure the skin is replenished and the barrier reinforced. These tasks are handed to proven ingredients including Phospholipids, Sodium Hyaluronate, Glycerin and Panthenol which draw moisture to the skin while also preventing water loss. 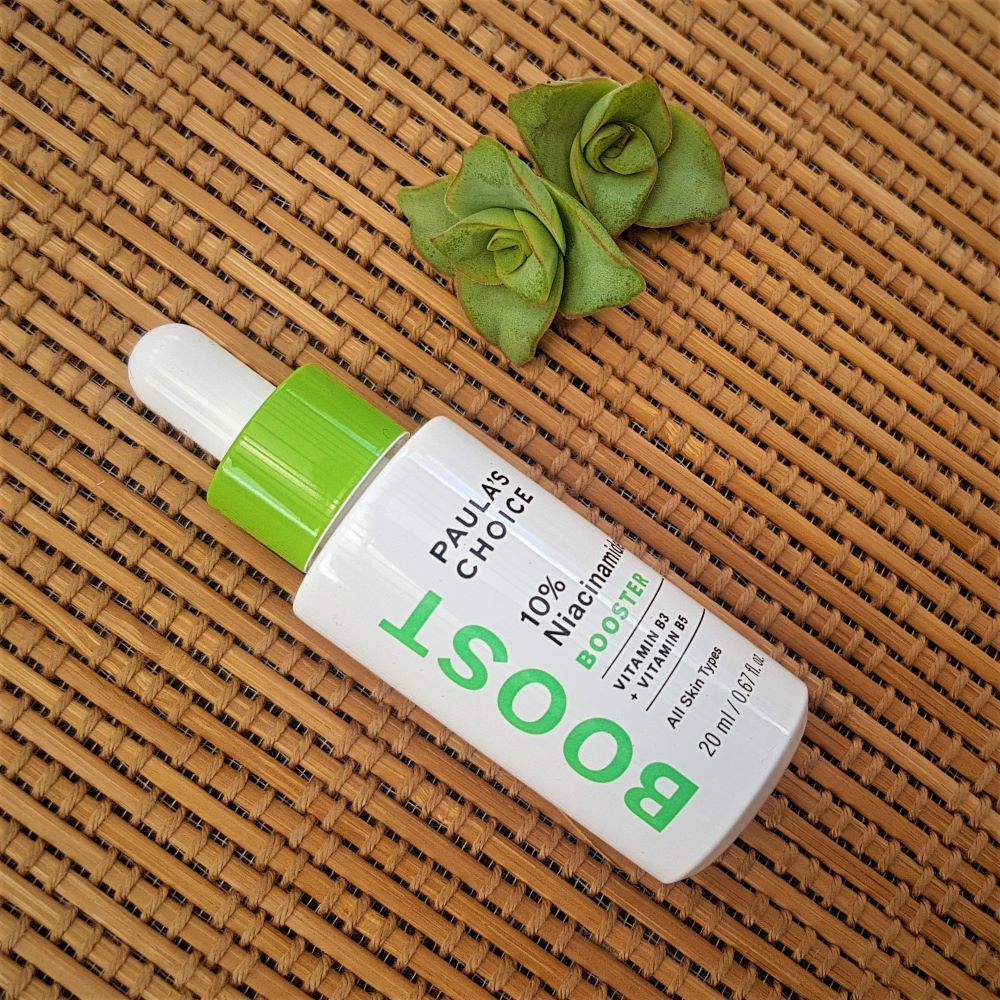 The serum booster is presented in an opaque bottle with screw top dropper dispenser. The opening incorporates a net which helps to scrape the serum from the outer surface when removing it from the bottle to prevent unnecessary dripping. 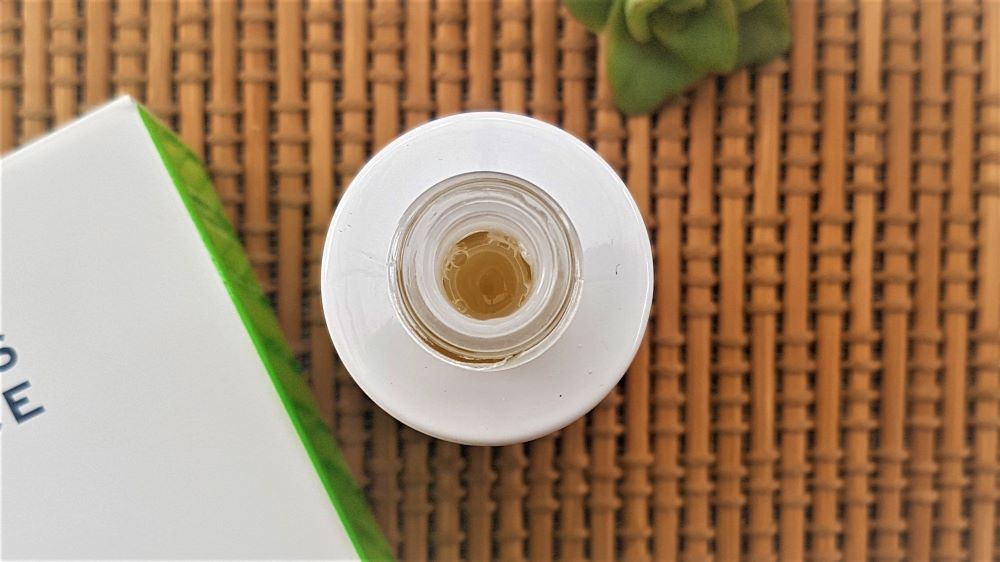 Apply to face and neck 1-2 times a day. May be used alone or with serum and/or moisturiser. For day time use, always follow with sunscreen. 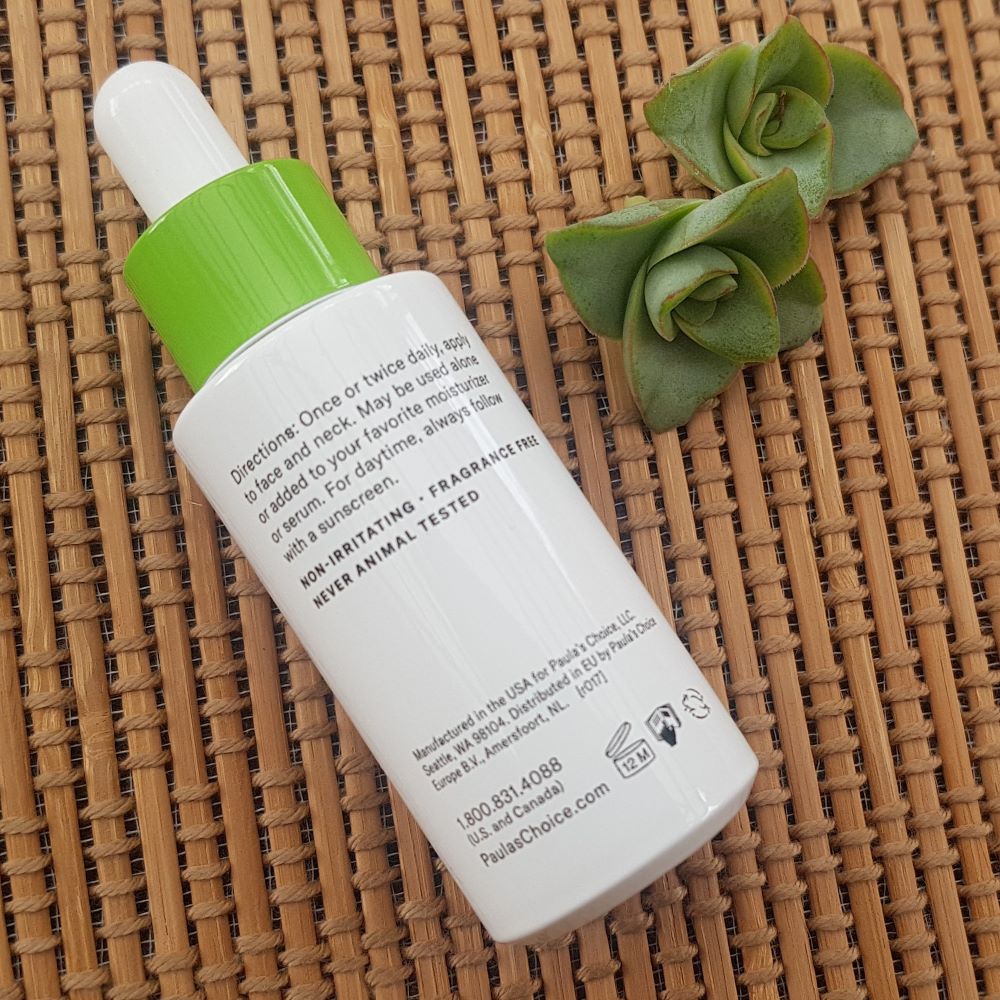 A 20ml bottle of the 10% Niacinamide Booster sells for AUD$62, however, Paula’s Choice often have percentage off sales so you can usually pick it up for 15%-20% less if you can wait.

The booster must be used within 12 months of opening.

The serum is well presented in a tough opaque bottle with dropper dispenser. A net at the neck ensures drips remain within the bottle when lifting out the pipette. I’ve just finished my first full bottle and haven’t lost a drop! The serum is denser than water but still loose and easily spreadable. It has a slightly cloudy appearance and very little scent, contributed only by the formula, with nothing added to enhance its smell. It applies beautifully, plays well with my other layers and leaves no residue. There is no sensation on the skin either. I apply this as my first serum layer following toner/essence and usually follow up with a hydrating serum or ampoule plus cream. 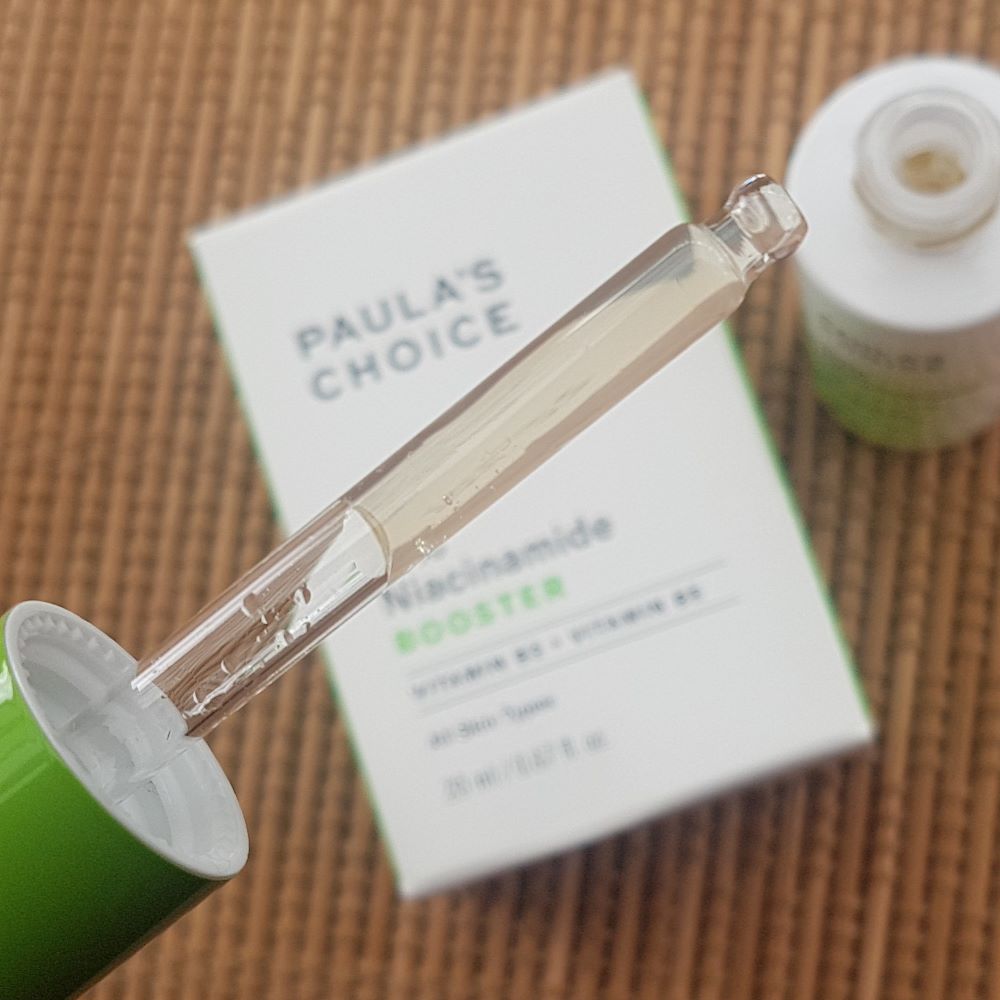 A quality formula boasts a significant amount of the hero ingredient, 10% ensuring results are visible, almost instantly. I found within a week of application, my skin texture had improved, smoother in the first instance and pore health visibly improved within a few weeks. My comedones (a combination or white and blackheads) were reduced. This effect is probably enhanced because I used it simultaneously with a BHA toner most nights. The combination is powerful and one I would recommend if you suffer any form or acne or have oily skin.

The beauty of niacinamide is that every skin type can benefit from it because it has such a range of benefits. I also saw an improvement in my overall skin tone. Slightly darker patches appearing to break up a little, making my complexion look healthier.

Although the cost of this 20ml bottle appears quite steep (AUD$62), it’s often on sale so you can pick it up at 20% discount for closer to AUD$50. It also lasts a long time! I was surprised that it lasted me almost 4 months with nightly use! A little really does go a long way. This will definitely be a repurchase product for me. 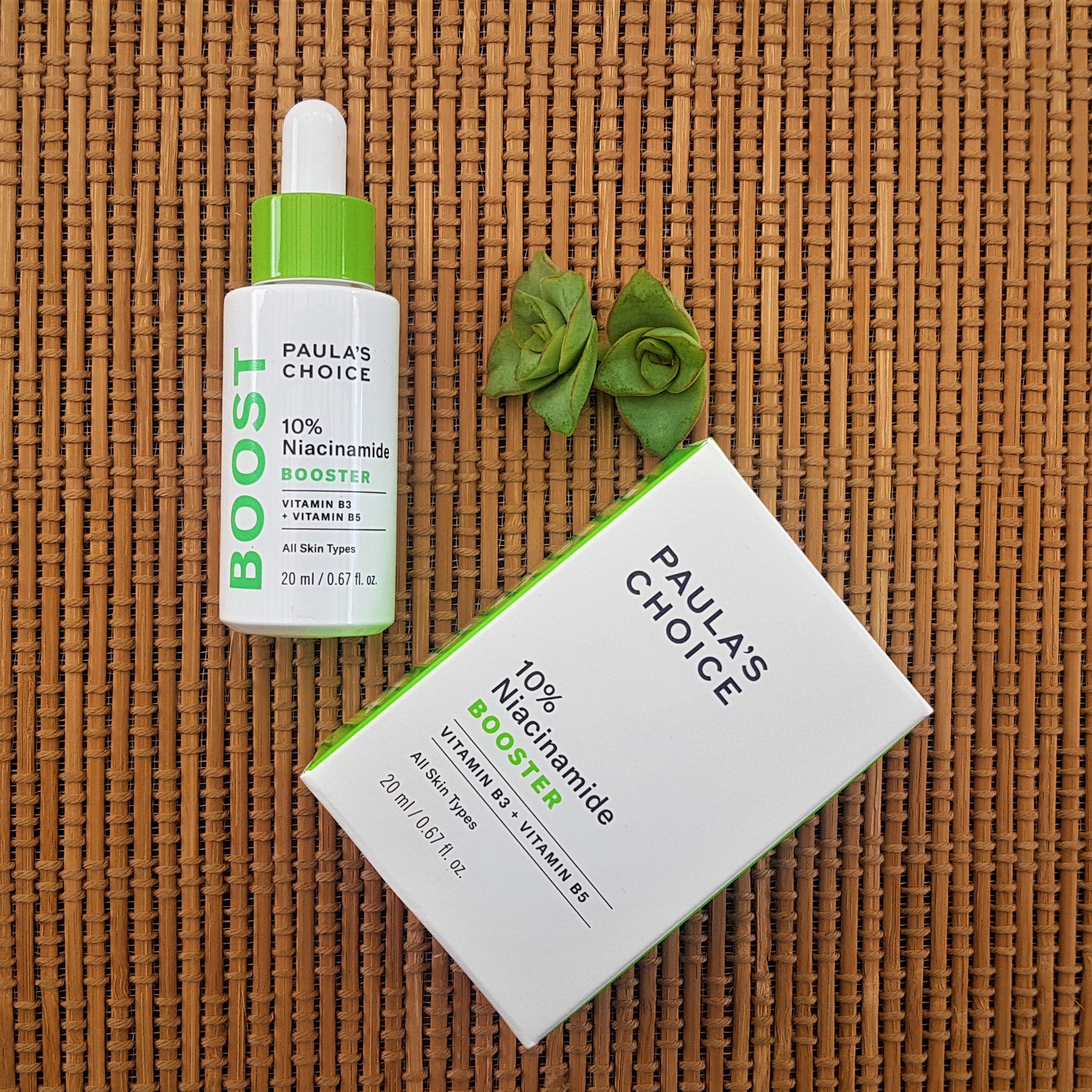 I think I fell in love with this serum by the third day of use. It has worked wonders for my main skin concern (white/blackheads), their severity and frequency noticeably reduced. I will definitely have this in my routine again, although I am keen to test out the upcoming 20% version by Paula’s Choice. Stay tuned! 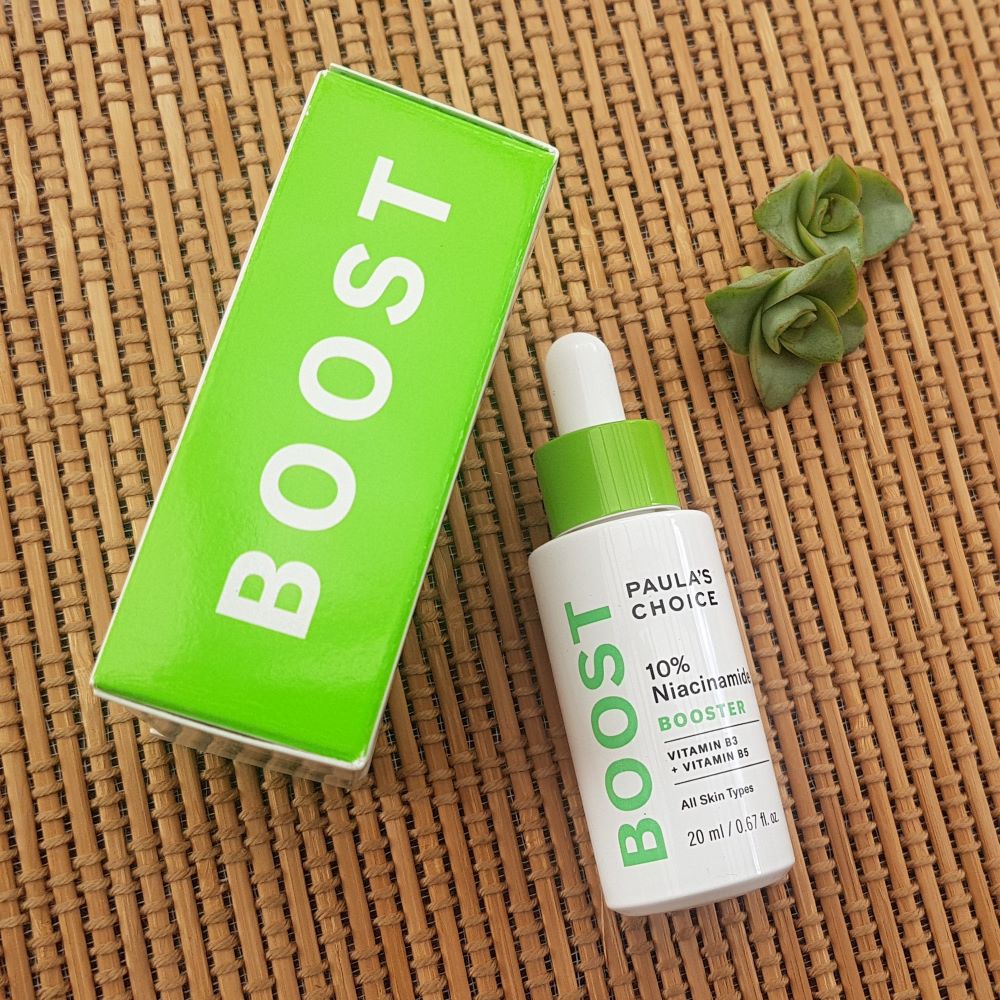 Please read in context with my disclaimer.